Pink Diamonds Vs. Bitcoin as an Investment 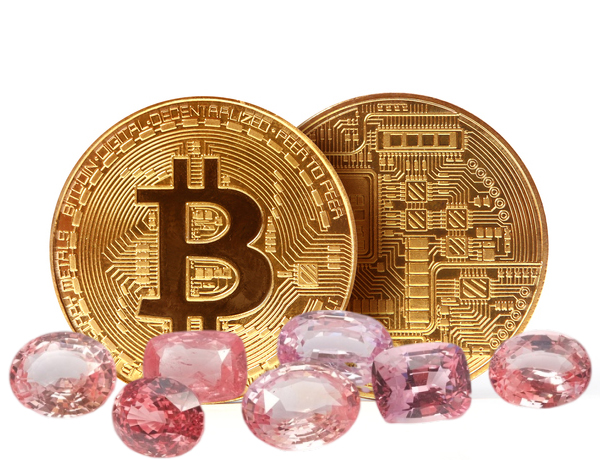 At Hard Carbon Inc. we are experts in the fancy coloured diamond market and have been advising clients for decades on the best investment strategies. Bitcoin has become a hot topic among investors in recent years and we have clients who invest both in pink colored diamonds and bitcoin. If you are debating what to invest in, here is some information on the pros and cons of both bitcoin and pink colored diamonds.

The term bitcoin was first mentioned in a 2008 white paper by Satoshi Nakamoto; the word derives from two existing words – bit and coin. Subsequently launched in 2009 bitcoin is a digital currently that is traded via a bitcoin network between users without the need for intermediaries. Unlike traditional currency, it is decentralized with no administrator, government or central bank overseeing it. There is a set limit of how many bitcoins exist – there are 21 million coins in circulation and no more will be created. Currently 18.77 million have been ‘mined’.

Bitcoins are verified by a network through cryptography which is then recorded in a public ledger that is accessible to all users called a blockchain. Perhaps the most important component of bitcoin is a process called mining. Bitcoin mining is accomplished by solving a computational puzzle and when you ‘win’ you are rewarded with bitcoin. Mining is integral to maintaining the ledger of bitcoin transactions. Since its inception ‘miners’ have become more and more adept at creating and using complex computer systems to advance mining operations. Bitcoin can be used to purchase services and products and sometimes exchanged for actual currency.

Pink diamonds are, unlike bitcoin, a physical tangible hard asset. Pink diamonds are some of the most-rare and sought after fancy colored diamonds. The majority of fancy colored diamonds are created when trace elements react with the carbon atom of the diamond; chemicals such as boron, sulphur and nitrogen all interact and create diamonds in shades of yellow, green and blue. But this is where pink diamonds are so unique, trace elements of chemicals are NOT found in pink diamonds. Instead the pink hue is created by a very distinct distortion in the crystal lattice of the diamond. This distortion means that when light hits this diamond it reflects light as pink.

One of the most popular features of bitcoin is its liquidity. Liquidity is the ease where an asset can be transformed into cash without affecting the market price of the asset. There are literally thousands of online brokerages and people can trade bitcoin without paying the usual high transaction costs associated with traditional trading. People are able to make both short and long term investments in bitcoin because they are able to both buy and sell it with ease.

Bitcoin is run in a manner called minimalistic trading, this means that traders or investors can invest in bitcoin by working with crypto exchanges. Bitcoin trades can happen at any time and from anywhere.

One of the most attractive things about bitcoin is that unlike traditional currencies which involve government regulation bitcoin does not have this level of oversight. The bitcoin system is entirely dependent on its blockchain technology. Due to the absence of government or bank involvement bitcoin is less vulnerable to inflation. Another benefit of the lack of banking oversight is that an investor can avoid hefty bank fees and processing fees are drastically lower than usual cross-border financial transaction charges.

Finally, many bitcoin investors prefer the anonymity related to their investment. No government authority or financial institution has your name or a record of your transactions. Bitcoin is one of the only unregulated things, along with colored diamonds, left to trade without government knowledge. However, multiple governments have expressed concern about Bitcoin and are looking at methods of control and taxation.

Bitcoins (unbelievably) can be lost. If something happens to your computer or if you lose your password, bitcoin is essentially lost in the system never to be recovered. Bitcoin is not insured and everything can be lost suddenly.

You can’t walk into a store and purchase anything with bitcoin and very few online merchants and virtually no governments take bitcoin as a form of currency (unless you are travelling to El Salvador…they started last year).

Bitcoin can also be incredibly volatile which leads to confusion if tangible items or assets are purchased using bitcoin. Within one week it isn’t impossible for bitcoin to drop several thousand dollars in value. Not only does this impact items that are purchased with bitcoin but a large investment in bitcoin can drop suddenly with no real reason as to why.

It’s an unfortunate aspect of our lives but hacking does exist. Bitcoin is vulnerable to online hacking and the loss of bitcoin is not insured. As no one person is responsible for the blockchain, complaints of a minor or major hack fall on deaf (actual no) ears. The decentralization of authority is both the most attractive thing, and the most concerning aspect, of bitcoin. Bitcoin, therefore, in our view, is not for the conservative investor.

Pink diamonds (indeed any diamonds) are free of regulation or government oversight. Unlike investments like stocks, gold or silver which are tracked by the government, you can invest and trade in diamonds in virtual anonymity.

In the last decade year pink diamonds have only increased in value and the closing of the Argyle Mine in Western Australia has only made these diamonds more sought after. In fact, pink diamonds have seen an increase in value by over 300% since 2012. Pink diamonds are one of the only investments where you are practically guaranteed a return on your investment.

Pink diamonds are very durable and are virtually indestructible. Due to their durability they do not degrade like other tangible assets (think houses and cars which age with wear and tear). And in terms of storage pink diamonds couldn’t be easier. Whether you use an at-home safe or a safety deposit box at your bank, pink diamonds are small, easy to transport and easy to keep safe.

History has shown that pink diamonds are also resistant to inflation and like many assets don’t follow collapses in the market or financial crisis. At Hard Carbon Inc. we encourage investors to purchase pink diamonds that are higher in carat count and a high hue intensity.

As with anything in life, it is important to do your research before investing in pink diamonds. Choosing the right dealer with a track record of ethical work in the fancy colored diamond market is key.

Re-selling your fancy colored diamond takes the right intermediary to get you top dollar on your initial investment. Without the proper network of clients re-selling could be a lengthy process. Fortunately, at Hard Carbon Inc. we have decades of experience and hundreds of clients across North America and the world, so we can match up sellers with buyers in a reasonable period of time.

As we have laid out the pros and cons for each investment above, we can confidently advise that investing in pink diamonds is a better, more consistent and safer option for your investment dollars. Pink diamonds have not dropped in value over a period of a year for over 50 years in a row, have produced consist gains and is a non-reporting asset.

Bitcoin has had some tremendous gains over the last 10 years, but it’s also had some spectacular losses so it’s a much riskier investment.  It is also one that governments world wide are lining up in their crosshairs, so it’s anomality is likely limited.

If you are ready to get started on investing in pink diamonds give us a call at Hard Carbon Inc. today!

Please fill out the form with your details, and a member of our team will be in touch.