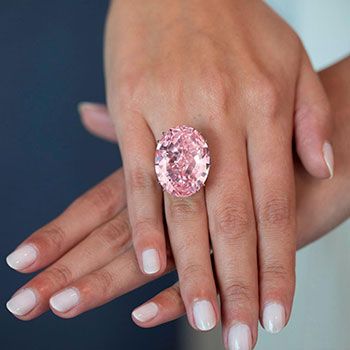 The History and Value of Fancy Colored Diamonds

The diamond has a long and unique history. Its value has only grown over millennia and today more than ever the design of the most valued jewelry in the world revolves around the diamond. It’s not surprising that the word diamond stems from the Greek word ‘adamas’ which means ‘unconquerable’. The lasting strength and resilience of the diamond not only makes it the perfect symbol of love for items of jewelry but an excellent investment item. At Hard Carbon Inc. we are experts in fancy colored diamonds that can be used for jewelry or pure investment purposes.

Diamond deposits were first found in India in the 4th century B.C. From their first discovery diamonds held special value across society; their strength and related ability to engrave in metal and refract light made them a sought-after global commodity. While in modern times diamonds are almost entirely associated with jewelry.   Hundreds of years ago they were used for many diverse purposes. Traded and transported across the infamous Silk Road that connected India to China, diamonds were used for everything from early medical treatments to good luck talismans worn by men when they went into battle.

The rarity of diamonds only added to their desirability. Diamonds are formed when carbon is subjected to extreme pressure and high temperatures and are found approximately 200 miles below the earth’s surface. The first discovery of diamonds in India was the main source of diamonds for the world until the 18th century when their resources were depleted due to demand.  In India, fancy colored diamonds were found in the 6th century and the different colours of diamonds were worn to denote the status of different levels in the caste system. Throughout history the use for diamonds went through changes based on both economic and societal factors.

During the medieval period they were sold in the Venetian markets and by the 15th century the wealthiest families of Europe started to incorporate diamonds into their jewelry as a sign of wealth and status. As demand increased the diamond mines in India were naturally depleted and by the 18th century diamonds were incredibly scarce. Briefly, diamonds were found in Brazil but this deposit was quickly overshadowed in 1869 when an incredible 83.5 carat diamond was found on the banks of the Orange River in South Africa. Since this discovery South Africa has been one of the main sources for diamonds.

There are hundreds of varieties of fancy colored diamonds because most colored diamonds have secondary hues, so you will see purple pinks, purplish pinks, orange pinks, orangy pinks, brown pinks and brownish pinks, along with pinks as an example. That is the case with each main color.   Their value depends on the color, color hue, color intensity, carat weight and the clarity of the diamond.

Some of the most famous pieces of jewelry in history are in fact created with fancy colored diamonds. The most infamous of these is the Hope Diamond. It is so famous that it is housed at the Smithsonian Museum in Washington D.C., and attracts three million visitors per year. This 45.52 carat diamond was found in India and has passed through such illustrious owners as King Louis XVI of France and his wife Marie Antoinette, King George IV of England, a wealthy banking family based in London called ‘Hope’ (where the diamond got its name) and ultimately in 1949 it was purchased by gem merchant Harry Winston who fashioned it into a necklace and gave it to the Smithsonian in 1958.

The Hope Diamond is classified as a fancy dark grayish blue diamond and has an astounding characteristic that has only added to its infamy – when it is exposed to ultraviolet light it glows of a strong red color for several seconds – this is a phenomenon known as phosphorescence.

Another famous fancy colored diamond is the Tiffany Diamond which was discovered in South Africa and weighed an incredible 287.42 carats. This yellow diamond was ultimately sold to the founder of Tiffany & Co. His jewelers worked for a year on designing how they would cut and fashion this incredible gemstone. In the end it was cut into a cushion shaped stone weighing 128.54 carats. In its history it has been fashioned into three different jewelry designs and was most recently worn by Lady Gaga as the centre stone of a necklace for the 2019 Oscar red carpet.

One of the most exciting aspects of investing in fancy colored diamonds is that they are still being discovered. In 1999 the largest pink diamond, ‘The Pink Star’ was found in South Africa by the DeBeers Group. Its original weight was 132.5 carats and it has since been cut down to 59.60 carats. It was sold at a Sotheby’s auction in 2017 and when last sold at $63 million, is considered the most expensive diamond ever sold at auction.

Fancy colored diamonds offer an incredible investment opportunity. These exceptional diamonds cannot be replicated and whether they are fashioned into a valued family heirloom or stored away for safe keeping fancy colored diamonds increase in value as they age. These rare specimens come in nearly every color in the spectrum and in a range of carats.

Please fill out the form with your details, and a member of our team will be in touch.